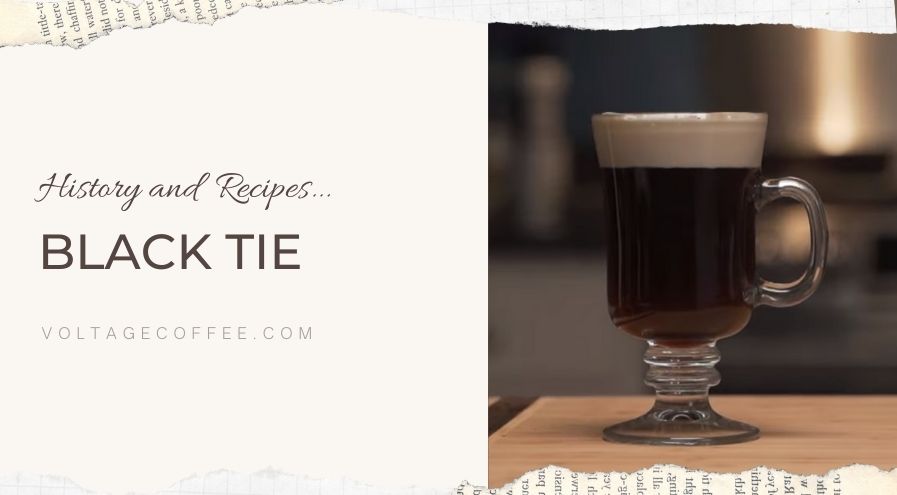 Black tie coffee certainly originated in Thailand but there are some origins that you would never have expected to influence this coffee, tea, and icy milk-based drink. He is what will help you understand the long and complicated story of black tie coffee. 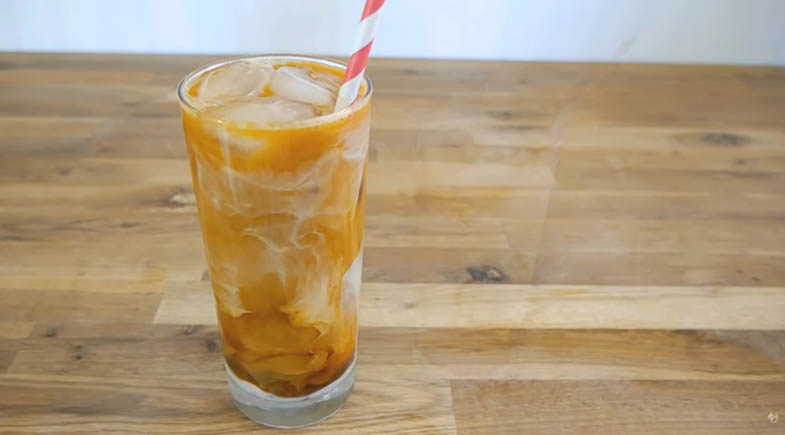 Most coffee websites will scoff at the idea that the Black Tie coffee is exclusively a Thailand creation. There is also the fact that many Chinese migrants who navigated their way into Thailand never fully learned the Thai language. These immigrants formed the Teochew population that occupied the southern edges of Thailand. It’s also a dialect that is distinctly Cantonese with a hint of colonial English.

The Teochews represent the largest immigration group within the Thai population. They also were incredible at drinking a blend of strong coffee called Oliang. This is often called Thai iced coffee these days and the original name is only spoken by the Teochew descendants. What made this coffee very similar to the Black Tie are the ingredients that also lend themselves to adding tea into the coffee.

It can contain cardamom, grains, and roasted seeds like sesame. At times it contained corn, rice, and soybeans, making it nutritional additionally. It’s brewed using the traditional Thai coffee filter, which is a cloth sock called a Tungdtom. It has a metal ring and handle-like attachment that allows the sock to sit inside the ring and in a coffee brewing vessel. This sock is used to make both coffee and tea in the same method.

What Type Of Tea Is Used For Making A Black Tie?

Much of the tea that was part of the southern import was all coming from Ceylon. This is known today as Sri Lanka and went directly through the southern seaports that were controlled by the Teachews. Chinese people are very shrewd business people and charged a great deal for this imported tea from Sri Lanka. This forced the Thai population to find a solution that would supply them with tea that didn’t cost so much.

It was pure luck that the mountains of Bai Miang in the North of Thailand just-so happened to grow a semi-wild tea called Miang. This tea wasn’t very good quality and needed additional spices to make it as flavorful as the tea from Sri Lanka. They added ingredients such as orange blossom water, star anise, cardamom, crushed tamarind seeds, and any other spices that would make it plenty flavorful.

As it turns out, this Thai tea mixture all depends on where you buy it too. If it’s coming from the south of Thailand, this is the tea from Sri Lanka, but from the north, it’s the local blend. This local blend is what Black Tie coffee is known to include, especially when it’s brewed with a hint of orange blossom water. Since there are differences between Thai tea mixtures, many locals believe that Miang is a better tea and is better suited for making a Black Tie coffee.

What About The Coffee?

Once again, before the 19th century allowed Thailand to cultivate Robusta and Arabica beans, they were imported through the southern ports instead. This is where the iconic blend of Oliang was born from the Teochew Chinese population. It wasn’t until the 1970s that the Thai government stepped in to stem the import of imported coffee from the south. A series of projects that allowed Thai people to grow coffee in the north soon emerged.

This gave locals the supply of coffee they needed and also created newfound revenue of Robusta and Arabica beans that could be grown in the fertile mountain regions. It also put a less financial strain on import costs that were further controlled by the southern immigrant. This is how Black Tie coffee became a normal drink served in Bangkok and other key cities throughout Thailand.

One Export Deserves Another

Thailand is best known for creating commerce through Thai cooking and the rise of Thai restaurants all through the western culture also imported cultural extras. One of these bonuses was the emergence of offering Thai iced tea to their customers. This also included the Black Tie coffee which came from migrating families that were new to Europe and America. The concept was so successful for Thai restaurants to become so widely known.

These exotic flavors were only previously known to the Thai people added more interest in the coffee industry and soon the Black Tie was being sold in cafes and coffee shops. Not only was Thai food growing in popularity in the 1960s, but Americans also welcomed this new cultural revolution with enthusiasm. This can be further linked to the growing wave of exotic tastes that also included welcoming Hawaiian culture into the scheme of things. 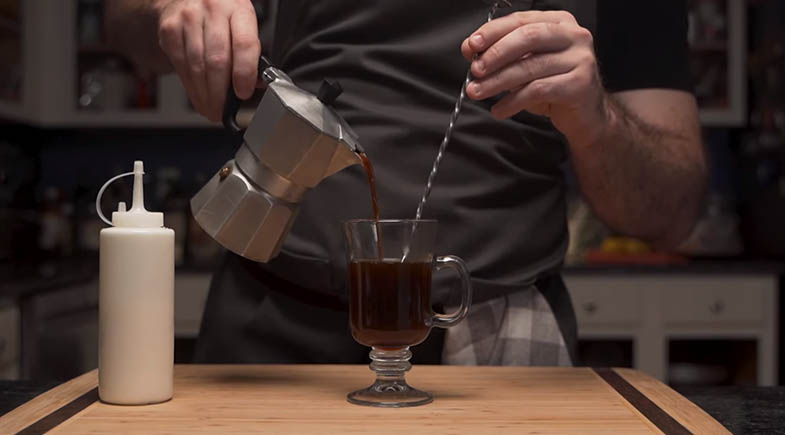 Here are two recipes that are offered to make your own version of these two iced coffee drinks. Try them both to see which one is your favorite, using these ingredients listed. 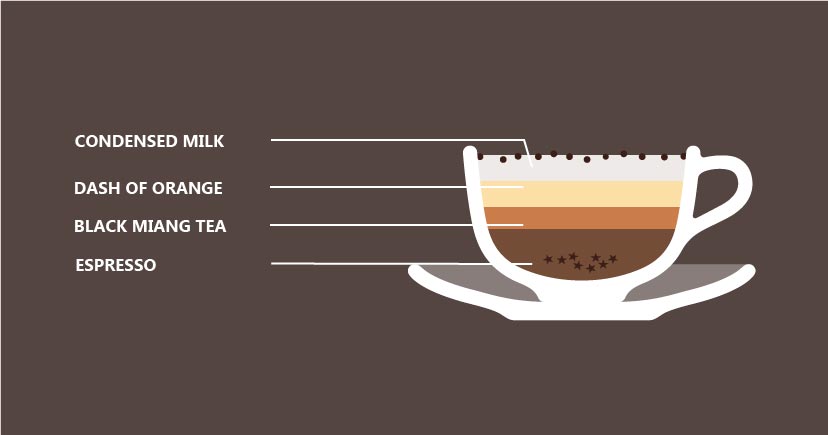 Brew your tea and espresso in separate brewing chambers using an espresso machine or Moka pot. Your tea can be brewed using a pour-over vessel to get the best results and allow them to cool before you use them. You add the tea first to a tall glass that’s filled with ice and then pour the espresso over the top of this very slowly. Finish your tea by adding a small amount of condensed milk or cream so it makes a swirly mixture. Now you can serve it. 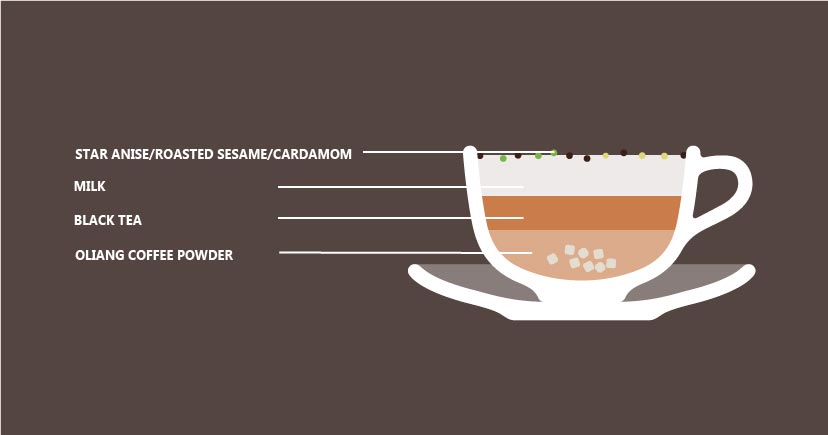 You will need a Tungdtom filter to make both your coffee and tea but you can also use a standard pour-over vessel that works well. Your espresso is best when making from a machine or from a Moka pot since the pour-over method can be tricky. The black tea also needs to be orange flavored and/or imported from Ceylon, Sri Lanka. You will need the following ingredients:

Combine your Oliang powder with the cardamom, roasted sesame seeds, star anise, and brew this in your Moka pot. The tea will require brewing in a pour-over cup using a filter adding sugar to flavor the tea as you like. These need to sit after brewing until they are at room temperature. Now add the tea into a cup with ice cubes and add the Oliang coffee mixture on top. The condensed milk is added slowly. This coffee/tea drink is now ready to serve.