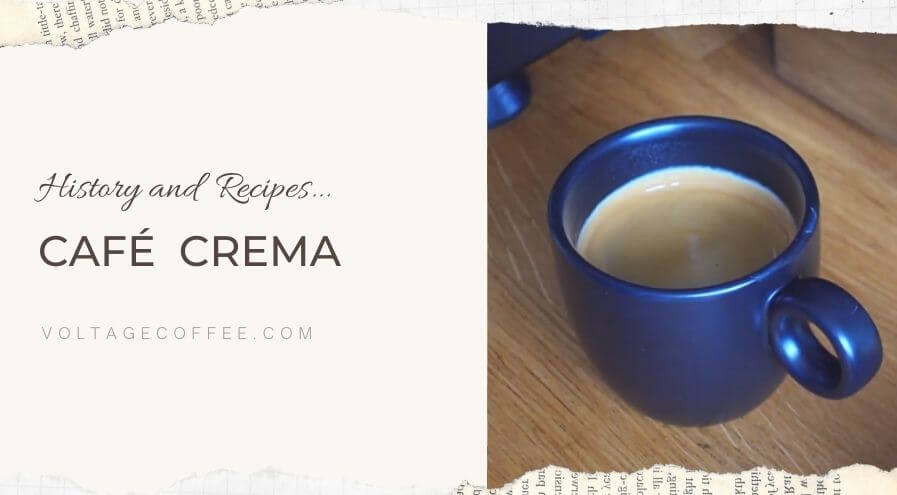 At first glance, this coffee drink sounds like a great creamy coffee that you order in a fancy café or coffee house. The realist is that the background story takes you back to a time when coffee what discovering a very important aspect of espresso extraction.

The Mystery Of Espresso Crema 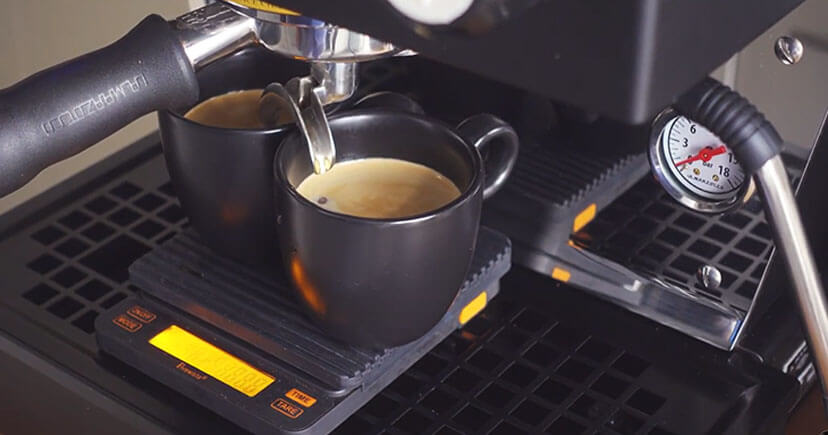 The best part of getting espresso from a real espresso machine, you’ll notice the iconic cream that forms on top of a shot of espresso. This is one of the aspects of espresso that was unexpected was a side-effect that emerged when espresso is extracted through specific bars of pressure. Crema is the result of microbubbles, hot water, and carbon dioxide that comes from coffee grounds that are pressurized through a filter at 9 bars of pressure.

Many espresso machines can produce crema but it wasn’t until the espresso machine was invented in 1948 that changed this forever. Before we jump right into that, this invention that was created in Italy was actually an inspiration to another inventor. If you haven’t followed the story of capsule coffee, you’ll have to check out Érik Favre’s background story.

It was his incredible discovery in a small café in Rome that led him to please his wife in the most unlikely way anyone might ever expect. You can find this story in the capsule coffee section.

The Espresso Machine That Changed The World

It was in 1938 that the Gaggia espresso machine was invented. It took a whole decade after the patents were accepted and the machines were built and marketed to restaurants and coffee shops. What made this machine very different from others as it used a pull pump to create the bars of pressure needed to make espresso. The average barista would pull the pump downward so the water would be pushed through coffee grounds.

It would create a crema that sits on top of the espresso coffee, but only the Gaggia machine seemed to create the best crema. As a result, Gaggia branded his machine with the term: cream coffee or what most baristas may know as Café Crema’. This is the earliest known term that was coined after his invention drew many to enjoy espresso in Italy after that. This family-owned company still manufactures espresso machines up to this very day.

For some reason, this little bit of history fell from grace and went largely silent. It wasn’t forgotten as you’ll find with the Nespresso machines and the Swiss inventor Érik Favre was influenced by the Gaggia machine. It was the only machine at that time that took some playing with to produce some of the most impressive crema that changed the way we enjoy espresso.

The Birth Of The Café Crema

This title has been used in several ways over the last decades and often is very deceiving. You’ll find big coffee brands including Jacobs and Kenco using the crema’ in their coffee products. These are a far cry from being espresso and what crema actually represents. It seems the Italians instinctively know that a café crema is how they describe the rich crema that is produced when making real espresso.

During the hectic 80s, when trendsetting yuppies went to Switzerland for skiing, it was common to see café crema returning once again. This version was often a Lungo espresso and was popular from the Swiss Alps down through the Northern slopes in Italy. It wasn’t brought back to the US for a while since this was primarily a European term that didn’t start to appear until coffee shops started to use it in the late 90s.

It was in the early 80s that Howard Shultz spent years trying to get a job working as a salesperson for Starbucks in Oregon. When he finally landed a job in 1982 as the marketing director, he immediately went to Italy to study the espresso craze. He found that espresso was not only a way of life in every city, their espresso included café crema among other espresso drinks. It represented a large social fabric that allowed people to get together.

Coffee houses all across Europe are also very similar and were meeting places where great minds and ideas were discussed. By the time Shultz returned from Italy to tell the owners of Starbucks- Jerry, Gordon, and Zev thought this concept was distracting. They were in the business of selling fresh roasted coffee and tea. They felt people should make coffee at home and no espressos or lattes would ever be served at their store. What a shock!

It wasn’t until 1987 that Howard Shultz quit Starbucks and started his own coffee shop chain based on the Italian espresso lifestyle. The concept went off the chart and he made an offer to Starbucks that the hippy owners fell hook, line, and sinker for. Eventually, Howard secured the rights to their coffee roasting process. He then renamed his coffee chain (Il Giornale) into Starbucks and the rest of the history of the corporate coffee we know today.

It seems that we have Starbucks to thank for the western expansion of café crema espresso that leaked into American culture. They even have the nerve to put this into their own recipe for the Americano. This version is called the Americano con Crema and bears no resemblance to espresso crema at all.

How Do I Make A Café Crema At Home?

The café crema is merely a long-drawn-out shot of espresso like a Lungo. But instead of 3 ounces of water extracted, the café crema is 6 to 8 ounces of water. It’s still a strong espresso with more water. As a result, the crema is further mixed into the water giving it the flavor profile of any average espresso shot. Since most home-based espresso machines will give different extraction settings, you might have to push the long espresso twice to get the Café Crema effect. 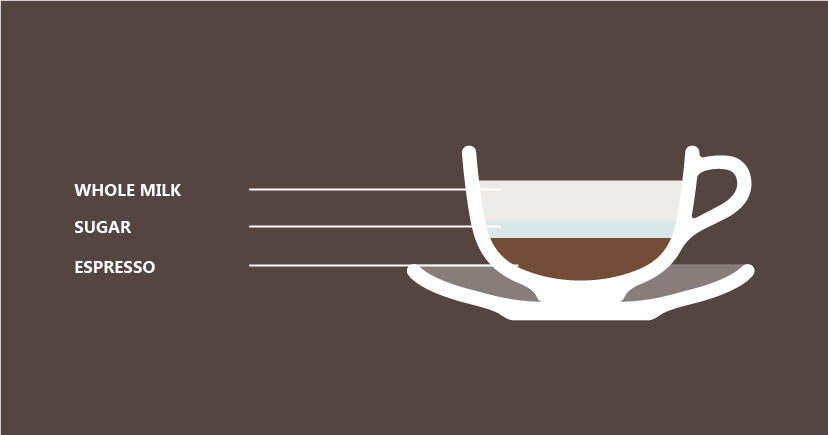 Set your coffee grinder to a medium-coarse setting and place the coffee grounds into an espresso machine, Moka pot, or Aeropress coffee maker. Adjust the water so you have 6x the amount of water that’s used for making normal espresso. For a Moka pot or Aeropress, you’ll need the larger vessels for more water used. Your espresso machine will need a double long shot to get the amount used.

When the coffee is extracted, add whole milk and sugar for taste. You can then enjoy your café crema. 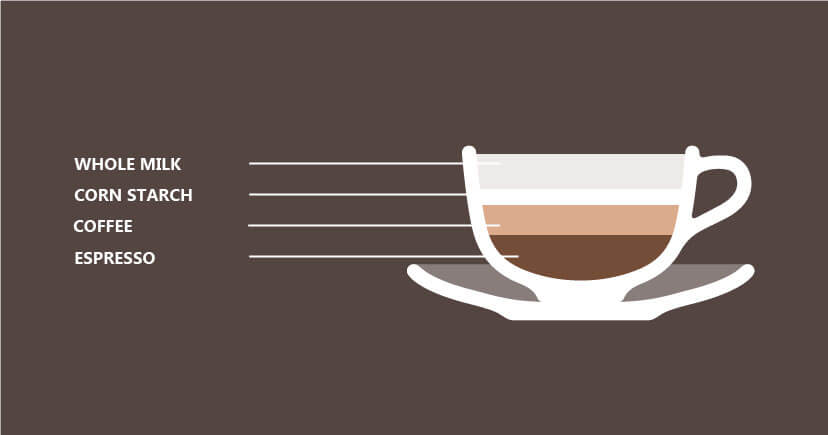 Make your espresso and coffee separately and pour them into a bowl. Add the corn starch, flour, or food thickener and use a whisk to make it thickened. Pour into a coffee mug and add milk and sugar as you wish. The coffee should be nice and hot so if you need to mix the coffee in a mug you should use a cordless coffee whisk to get the coffee to become thicker. Enjoy.