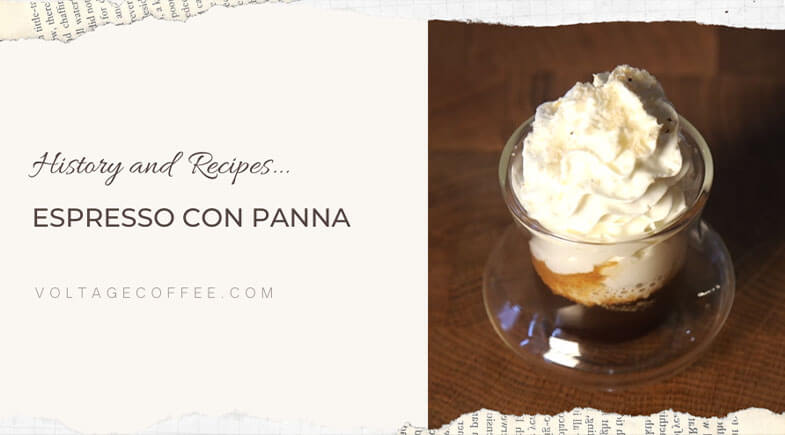 Time and time again, we often confuse the origins of select coffee drinks for being Italian or even Spanish including the delightful Espresso con Panna. When it comes to cross-over coffee drinks, people seldom think about the rest of Europe’s influence in how these mixed coffee drinks tend to migrate.

Where Does The Espresso Con Panna Come From?

Coffee has become a well-documented trip all over Europe with each country adding something to the variety of brewing methods as time goes by. When looking at the core of ingredients for any standard Espresso con Panna, becomes clear this is certainly not Italian or Spanish at all. The closest that we’ve found is from a country most people don’t ever consider to be known for coffee- but they are highly influential.

When you hear about Vienna, it may sound Italian at first, but this Austrian capital city is where international coffee first made its mark. You may have heard of Viennese coffee in upscale cafes and will immediately know this is a special blend of coffee beans roasted to perfection. They primarily use Arabica coffee beans which are then roasted long enough to be considered medium-dark roasts.

You might say that a Viennese coffee is the perfect after-dinner treat that wakes up your senses with a full and robust taste. But did you know there is also another version that is just like the Espresso can Panna? In Vienna, this is called the Franzikaner, which translates to become The Franciscan Monk. It’s 1/3 cup of coffee, 1/3 cup of milk, and 1/3 cup whipped cream. This drink is named for the color of coffee compared to the monk’s robes.

During the Battle of Vienna in 1683, this is the best-known origin where Viennese coffee had originated from. It was literally discovered by accident when the retreating Ottomans left behind their Arabica beans. This coffee was so strong that it needed to be thinned with cream to make it taste better. Hence, a Franzikaner coffee is a double treat with whipped cream on top.

Similarities Between A Viennese Coffee And Espresso Con Panna 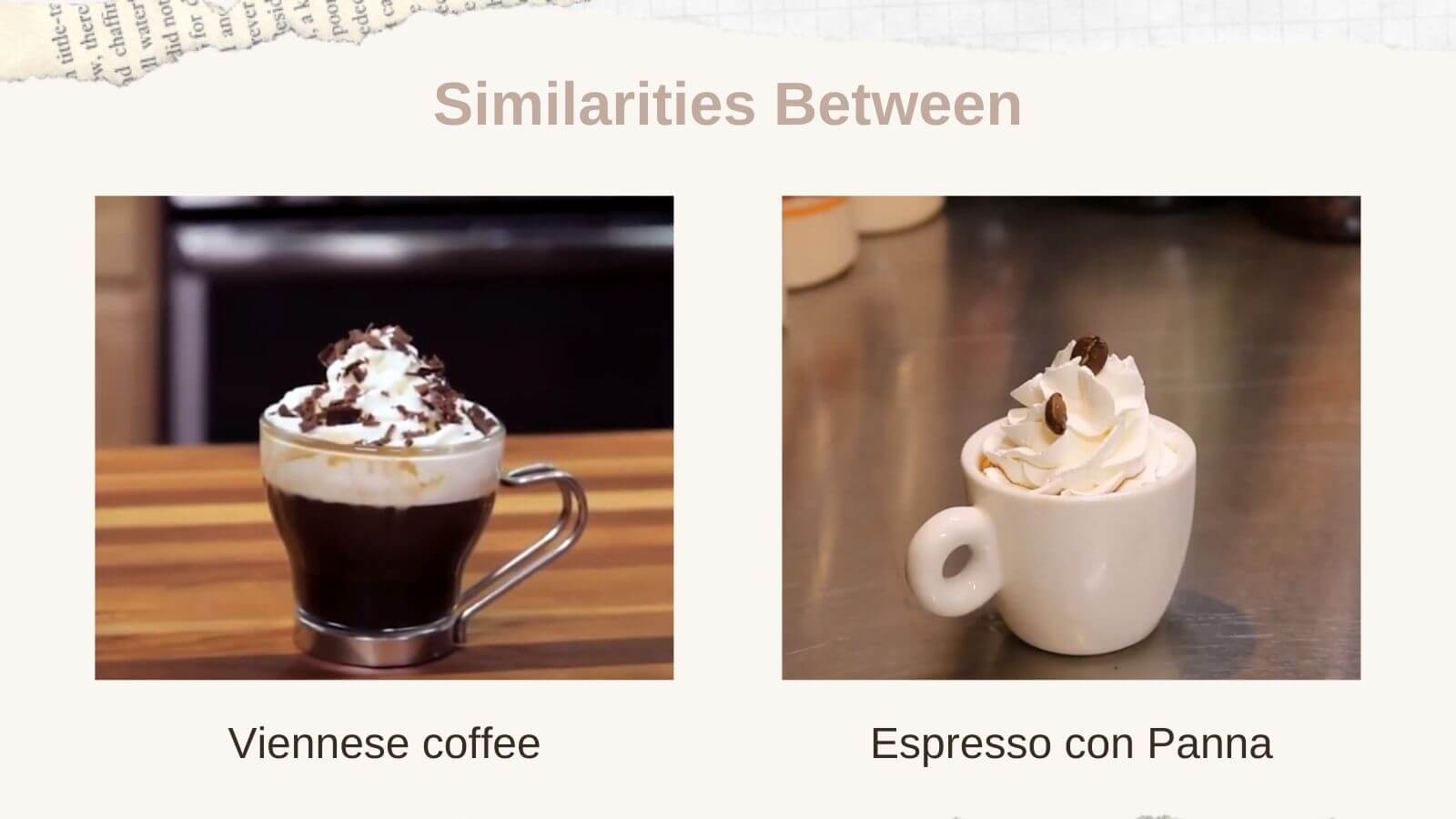 Aside from the added cream into a Franciscan Monk and the Espresso con Panna is simply an adjustment to only use whipped cream. The Italian version uses more whipped cream on top to make it sweeter. Most of these recipes will sprinkle dark chocolate shaving on top as a decoration. As the recipe traveled through Europe, it likely was added to Italian restaurants due to its popularity in Vienna.

It can’t get more obvious than in Spain where they name this sweet coffee drink the Café Suizo, or when translated to English, it turns into Swiss Coffee. Not exactly one the money for getting the country right since this isn’t from Switzerland, but close enough. Austria and Switzerland are neighboring countries and often get confused by tourists traveling across Europe.

To get the authentic effect of whipped cream, heavy cream is whipped into a thick and delicious whipped cream texture. It’s not uncommon to add some vanilla flavoring into the cream before it gets whipped up. This is then placed into a refrigerator until it’s used as a topping for this coffee drink or on a dessert. Regular whipped cream instant mixes aren’t advised since this defeats the point of the heavy cream flavor mixed with the coffee.

Are There Similar Versions Of Coffee And Whipped Cream? 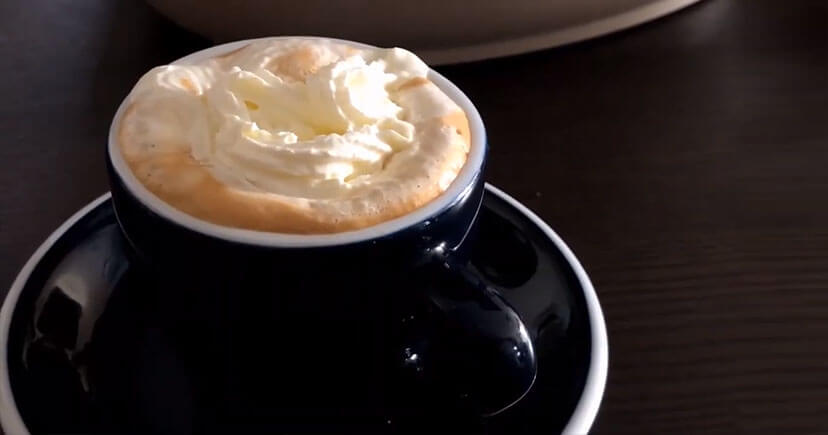 What makes the Espresso con Panna different is how the ratio of espresso or coffee is equal to the amount of whipped cream you add. Almost as if to say that the whipped cream will flavor the coffee in every single sip as you drink it. It’s a sophisticated big kid’s drink if there ever was a reason to love an after-dinner dessert treat. But if you order it by name, you have to specify getting a Franzikaner coffee or Espresso con Panna to keep it simple.

For this, you don’t want to cheat yourself by using any type of coffee. It’s best to buy a Viennese roast or medium-dark Italian roast. Whichever you prefer is up to you, but this coffee must be strong to complement the rich whipped cream that you’ll make. And yes, you need to make your own whipped cream to get the best results. You and your guests will be amazed at how much better it will taste using fresh ingredients. 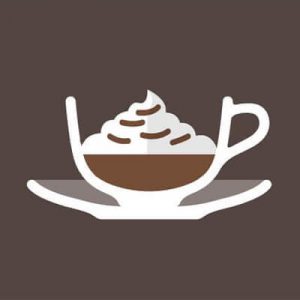 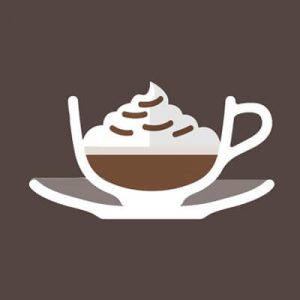