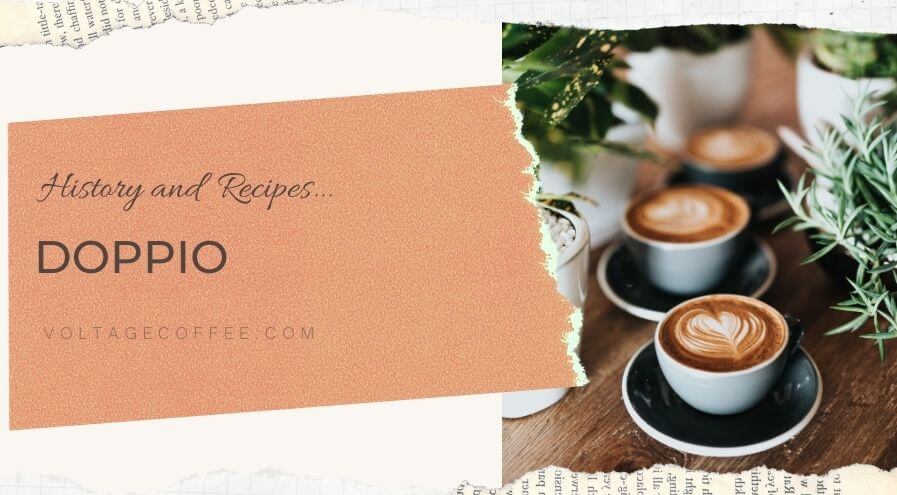 Here is one of the more iconic espresso drinks that can be found at any coffee shop that has a professional espresso machine. Heck, if you have a home espresso machine that features a single shot function, you can recreate the classic Doppio for yourself.

Why Is It Called A Doppio? 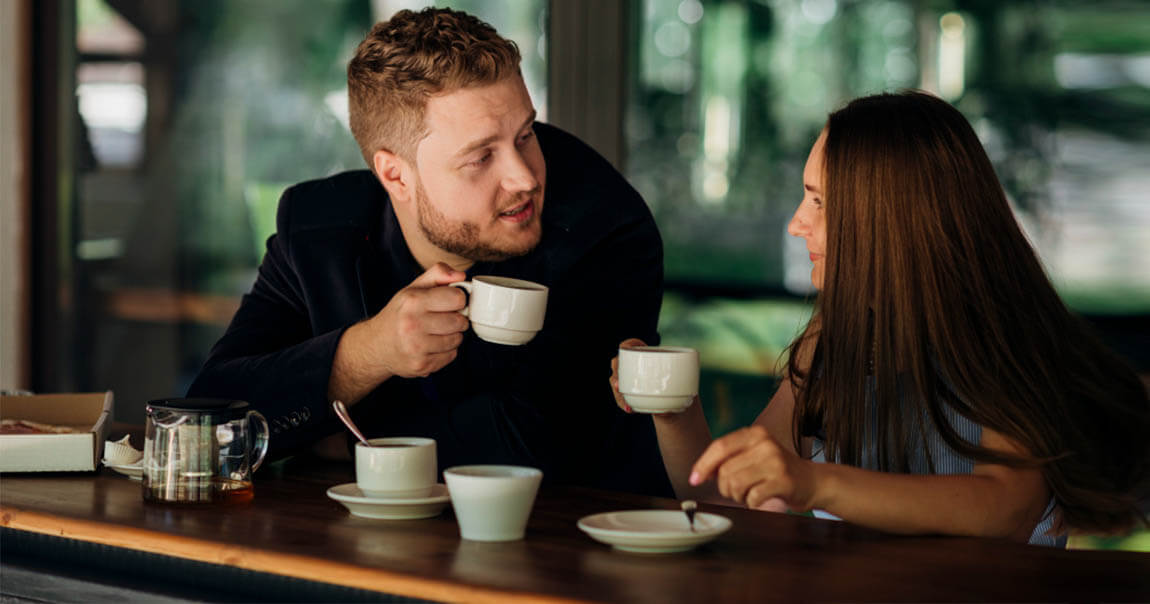 References to classic Italian espresso culture in the United States are sometimes comical and sometimes confusing.

Many words you’ll see on today’s coffee shop menus came to us via Starbucks. For example, the ubiquitous use of the term “macchiato” to describe a giant caramel milkshake. Other traditional Italian words have also been warped by the marketing engine of the American coffee industry.

One term that Starbucks popularized in Seattle in the 1980s and 1990s is “doppio.”

In Seattle, under the watchful eye of a certain green mermaid, the use of the word doppio is still going strong today. In fact, if you order a “double” in Seattle, many baristas will check in with you to make sure you didn’t mean “two doppios.”

In other parts of the country, though, saying doppio in a high-end coffee shop might make you stand out as someone who’s not an industry-insider.

When a genuine professional barista hears you use the word doppio anywhere outside of a Starbucks, they may think one of the following things:

So, if you ask for a doppio in a fancy café and the barista starts asking you lots of prying questions about your order, don’t be afraid. They’re just trying to figure out what kind of customer you are and how best to serve you. If you want to touch up on various types of coffee pay a visit to our comprehensive database.

Let’s step back into European history to get a better idea of why the Doppio is still one of the most beloved espresso-based drinks that gives a nice little kick. The name itself is derived from Latin and is a combined version of three combined Latin words. This includes Dous, Plus, and Pleo which create the word “Duplus”. When this was translated into Italian, the rough word that came from this became Doppio. Pronounced “DOH-pee-oh,” the word just means “double” in Italian.

Since the Italians were masters at the culinary craft of roasting and combining espresso beans, they would call each shot that was extracted from their crude espresso machines either a solo or Un Café which is also a single shot of espresso. Since a solo and doppio were synonymous with a single or double shot of espresso, they really didn’t need much attention when being served as a specific drink concoction.

Those who order a single or double-shot would then add sugar or cream to their espresso and enjoy it as soon as it was served. Unlike other drink recipes, a doppio is very simple to make since it’s just a double shot of espresso that is twice the amount of espresso that you would normally get at the café where it was ordered.

Ordering a Doppio in Italy

No American ever really fits in walking around the streets of Napoli, but it’s polite to try at least to avoid offending local culture and customs. This sentiment tends to raise some anxiety in most travelers as they try to “look local.”

Espresso bars are one of the core components of Italy’s culture and food-ways. As an espresso lover traveling in Italy, you might find yourself intimidated when you walk into a traditional Italian café for the first time.

Remember that baristas in Italy are just as interested in pleasing their customers as they are anywhere in the world. Order what you want, and don’t let the weight of tradition bear down on you.

That said. If you’re trying to fit in like a local at an Italian café, it’s essential to know that they have a deep-rooted and strictly regimented culture and etiquette compared to American coffee shops.

The traditional Italian espresso comes in one size. When you order a doppio in Italy, you’ll likely get two of these drinks served in one cup. It’s probably best to order a second espresso when you finish the first, rather than trying to get a larger drink.

A few other things to remember in Italian coffee culture:

Even though third wave specialty coffee is finding its way into Italy’s café culture, also keep in mind that some of the best coffee shops in Italy may not look like coffee shops at all.

One of the great joys of exploring coffee in Italy is drinking a world-class doppio espresso at the bar right next to someone playing a slot machine and drinking a beer at 9 in the morning. 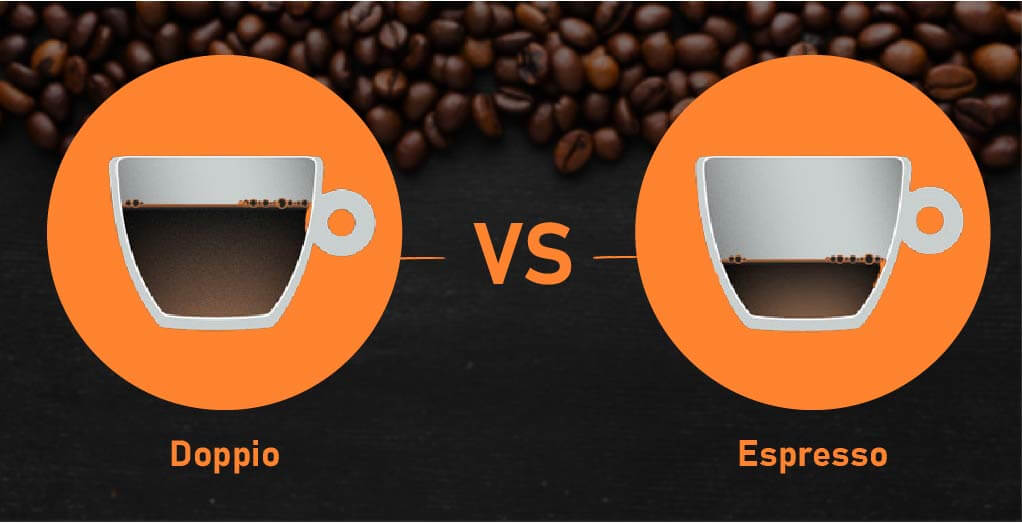 The cultural differences between a doppio and a standard espresso are more easily defined than any real physical difference.

There are many different meanings connected to the word, so what you get when you order a doppio will vary greatly depending on where you are in the country and what kind of coffee shop you’re in.

The amount of coffee used to pull a single shot of espresso is very small. A thin coffee bed in the portafilter (the removable filter basket used to brew espresso) makes it more difficult for the barista to properly tamp the coffee (pack it down into a smooth even puck). Pulling a double shot allows the barista more room for error, and produces a more consistent beverage.

Because of the relative ease of pulling consistent, high-quality shots using more coffee, most coffee shops in the United States have come to serve doubles as their standard shot size. Because of this, the word doppio is viewed as somewhat old-fashioned in most parts of the country.

Unless you’re in Seattle, it’s probably safer to use the word “double” when ordering an espresso in the United States. Better yet, just say “espresso” and let your talented barista present the coffee the way she thinks it tastes best.

Is Doppio Stronger than Espresso? 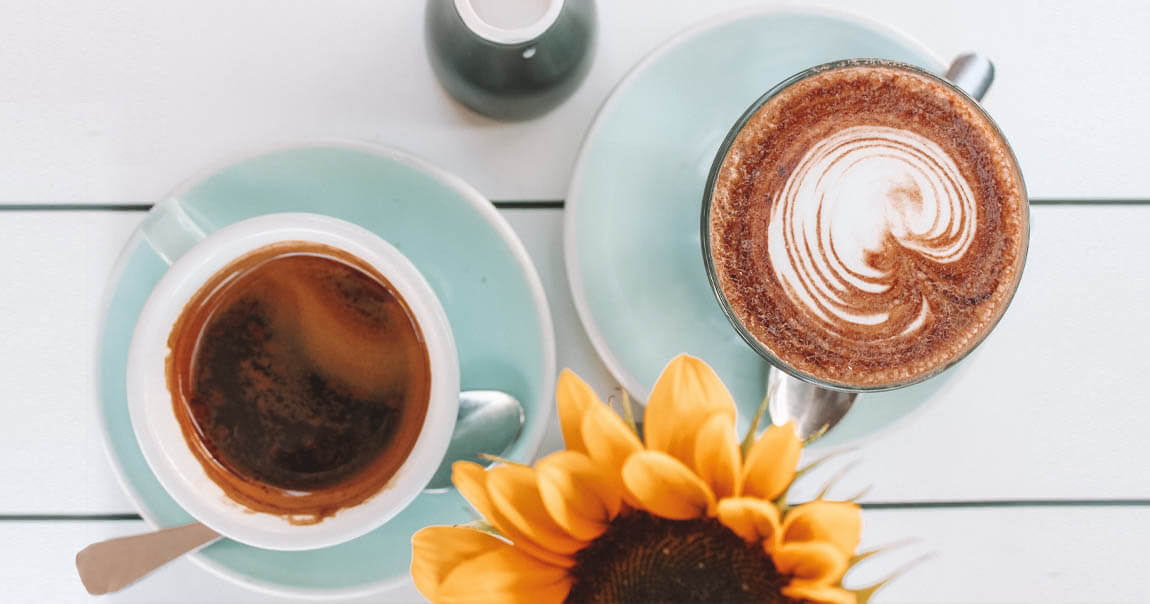 When Was The Doppio Invented?

Centuries before the ability to brew espresso, coffee was normally ground up and filtered through a coffee filter that could separate the coffee grounds from the hot water that was poured through it. It was at the time of the industrial revolution that forms of machinery were beginning to give many curious innovators something to tinker with. As far back as 1901, the first recorded instance of coffee was produced with steam and water pressure.

This is when a new patent was developed that used steam to create a stronger and distinct type of coffee that became espresso. Angelo Moriondo was one such individual who was the first to patent this idea in 1884! It was a large boiler that could produce 1.5 bars of pressure to then push water through finely-ground coffee grounds in a small chamber. It would take an additional 20 years before this invention became famous after it was unveiled in Turnin, Italy.

Luckily, two Italian chaps who were essentially the rock stars of coffee science in their day are often credited for the creation of the modern espresso machine. Luigi Bezerra and Desiderio Pavoni were certainly ahead of the curve when they filed the patent for their new espresso machine in 1903. History books get this wrong by citing it was created in 1901, but this isn’t considering that the patent would be the final word in this story.

Not only did they improve the original design, but they were also responsible for adding the portafilter and brewheads that allowed the espresso to drain into a single cup. Sadly, Angelo just wasn’t in the position to improve his design and lacked the money to do anything further with his original patent from 1884. This is where one man’s folly becomes another innovation that includes room for improvement, which is exactly what happened.

While Luigi had plenty of experience with creating liquor, it was his partner Desiderio, who actually knew Angelo- immediately then offered to buy his patent for a song and a dance! The first thing he did was to examine the problems with this steam-powered espresso-making machine and add improvements that would make it user-friendly. One of the first things Desiderio did was to add a first pressure release valve.

This immediately prevented splattering espresso that came from the machine when a barista released the pressure to extract the espresso itself. He also is credited with creating the steam wand that allows excess steam. The most curious part of these two is they used their skills to promote this invention for the purpose of mass marketing and upgrading the coffee caf&eacute; culture that was common throughout Italy at that time.

Sadly enough, the very first prototype machine that was produced for Luigi and Desiderio was most likely built by a distraught Angelo. Not only could he afford to push his invention any further than selling off the idea, two clever Italians who heavily pushed a Jules Verne-looking technology of espresso coffee earned all the credit.

How Can You Make A Doppio At Home?

You don’t have to take credit for taking anyone’s invention and making mad money from it, but you do need a home espresso machine that does the trick. Even if you have a simple Moka pot, you can still get great results but there is a catch. You should know you need to make two separate shots and not a double shot that many espresso machines advertise. If you happen to have a hand pump espresso maker, you can also produce the same results. 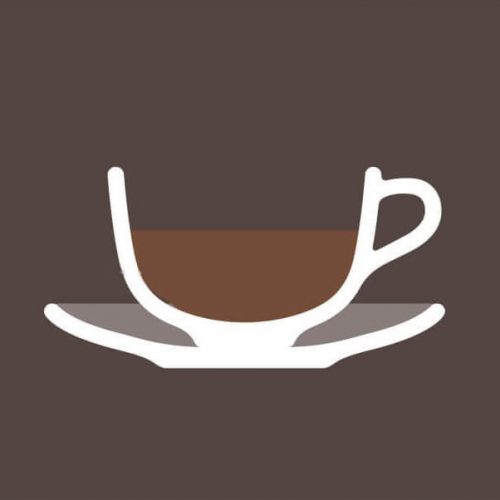 VoltageCoffee
The Specialty Coffee Association defines espresso as:“Espresso is a 25–35ml (.85–1.2 ounce [×2 for double]) beverage prepared from 7–9 grams (14–18 grams for a double) of coffee through which clean water of 195°–205°F (90.5°–96.1°C) has been forced at 9–10 atmospheres of pressure, and where the grind of the coffee is such that the brew time is 20–30 seconds. While brewing, the flow of espresso will appear to have the viscosity of warm honey and the resulting beverage will exhibit a thick, dark golden crema. Espresso should be prepared specifically for and immediately served to its intended consumer.”
Print Recipe Pin Recipe
Total Time 10 mins
Course Drinks
Cuisine Italian
Calories 10 kcal