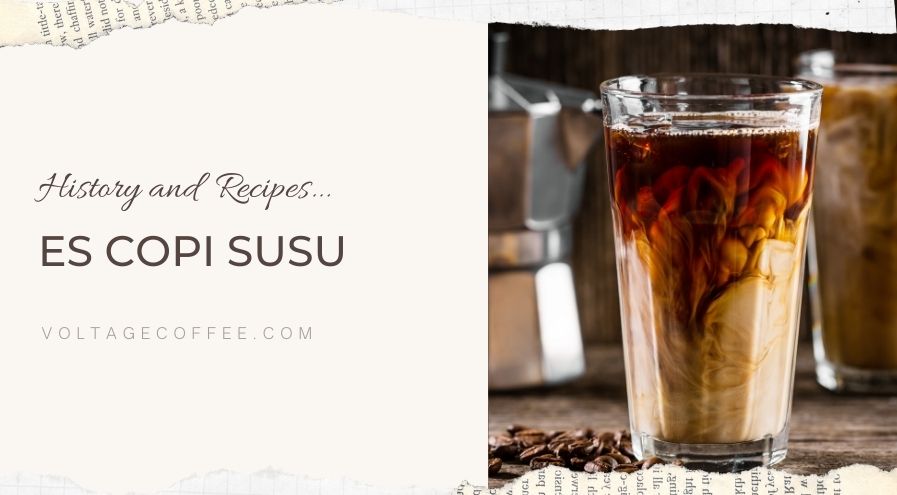 All across Indonesia, Es Copi Susu is literally translated to iced milk coffee that has coffee grounds that settle toward the bottom of the cup. In recent years, Es Copi Susu has seen some recipe changes that have made it even more popular across the globe.

The Start Of Something Sweet 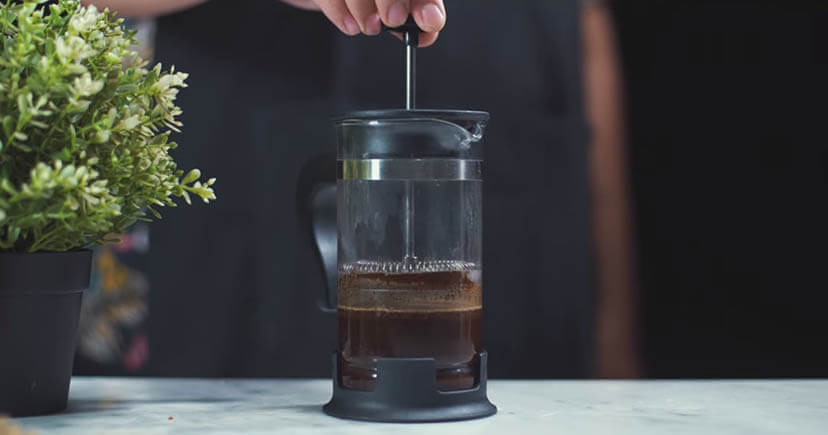 It’s no hidden secret that Es Copi Susu has been around for decades and is an espresso-based drink that uses chilled milk and ice cubes to make it refreshing. In the beginning, the drink often was brewed very crudely and was unfiltered. The coffee grounds would still be inside the espresso and usually sank to the bottom of the cup. Whether or not this was intentional, it depended on the coffee houses throughout Indonesia that served this drink.

There are many scatter recipes that show there are subtle recipe changes including the type of sugar that’s used. Some agree that brown sugar is the best, while others firmly stick to using palm sugar. There is also a difference in milk that is used, since the original recipes call for condensed milk in a can, while others recommend using fresh whole milk. One can imagine that condensed milk will last longer than fresh milk, especially in balmy Indonesia.

But for most coffee drinks that start somewhere in this world, Es Copi Susu took a while to catch on. It was through careful marketing that helped it to become a global success. It also helped a local coffee shop in Jakarta to become the best-known credit to who changed the recipe and turned into an overnight success.

As mentioned before, Es Copi Susu isn’t new to most Indonesians, but it was very local to smaller coffee houses in Jakarta. One select coffee house named Kopi Tuku decided to refine the recipe using palm sugar and whole milk. They used Arabica beans that make this coffee drink strong but not overly acidic. The whole milk helps make the espresso pleasingly powerful, while the palm sugar gives it a sweet and seductive taste.

Because it comes with ice cubes, this further adds to the thirst-quenching effect. It also allows them to sell their coffee drink using fewer ingredients and keeping the price per cup very affordable. What makes this drink stand out so much more than others is they used Instagram to promote their drink. It’s only been a couple years since they launched their new iced milk drink, but they’ve been booming since then.

Ever since the news broke about Kopi Tuku reeling in mad cash for their iced milk coffee, many others across Jakarta jumped on the bandwagon. And this is where the recipes all started to get muddied even further. Some were serving condensed milk, while others were using almond or soy milk. There is even a recipe for one drink that has a hint of ginger. All of these shops sell these drinks per cup costing between IDR 17-20k.

This would cost the average coffee patron around $1.17 to $1.20 per cup. A real steal for tourists but for most people in Indonesia, this is still quite affordable for people living there since the lowest salary starts at 3 million Indonesian rupiahs. Compare this difference of iced coffee drinks you’ll find at any Starbucks and you’ll see the difference right away.

Is There A Difference Between Sugar And Milk That Used? 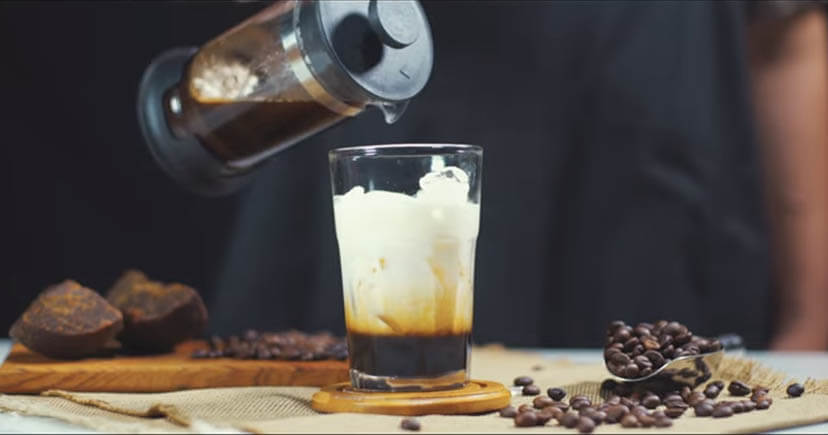 You might have questions on whether or not to use condensed milk or whole milk. Just like any other processed milk in a can, all condensed milk has 60% of the water removed from whole milk and is further pasteurized so it can last for years while sealed. It’s often a favorite for baking as this type of milk is sweeter and much creamier than regular milk you buy at the store. There’s not much difference unless you like the taste of condensed milk over whole milk.

When whole milk is used, then a sweetener needs to be added to give Es Copi Susu the overall sweetness that iced milk coffee comes with. This is where the debate about palm sugar and brown sugar often gets confused. The truth is that palm sugar is darker than brown sugar, making the taste much sweeter than brown sugar. Many sugar processing plants will add molasses to white sugar to create brown sugar.

This is why most brown sugar that you buy from the store can be packed due to the sticky molasses. Unprocessed sugar that is often called sugar in the raw, raw sugar, or unbleached sugar all taste the same. So if you want a sweeter sugar, then palm sugar is the best way to go. If you’re watching calories, you can additionally use sweeteners that don’t contain sugar to flavor your ice milk coffee instead.

This drink is always iced, so it’s unlikely you’ll ever see a hot version of this coffee floating around. Here are a couple of popular variants that you’ll find pleasing on a hot day. 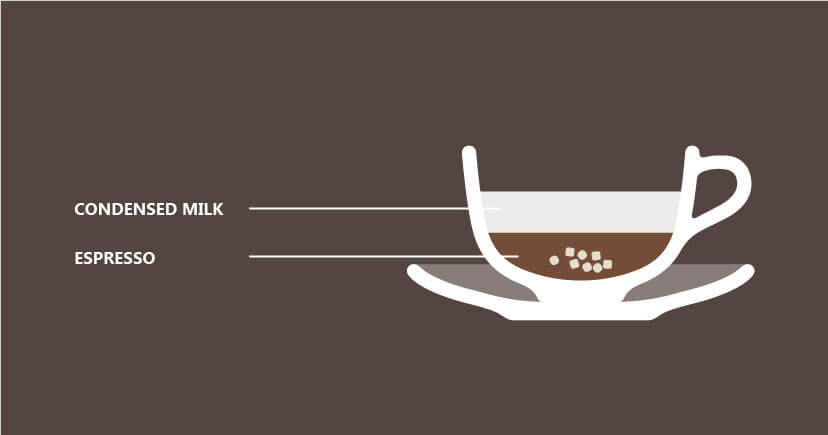 This recipe uses the method for making Copi Tobruk and needs one or two tablespoons of ground Arabica coffee beans in a medium-fine grind setting. Add these to your tall cup and pour hot water up to the middle line of your cup. Let this brew and mix it with a spoon. Now you allow the coffee to cool down before adding some condensed milk and ice cubes. This will make your drink sweeter but there will be coffee grit at the bottom, so don’t use a drinking straw. 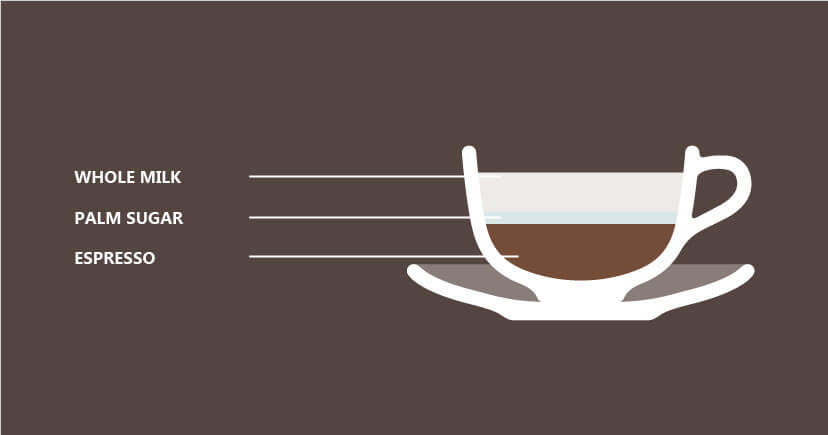 If you use a home espresso machine or a Moka pot, you can brew up a batch of espresso using 100% Arabica beans. Allow this coffee to cool down and pour this into a tall drinking glass. Add your brown sugar or palm sugar as you like, keeping in mind that palm sugar is better if you use two shots of espresso. Add cup of whole milk and then ice cubes after that. Stir well using a spoon to mix your sugar and milk. After this, it’s ready to enjoy.