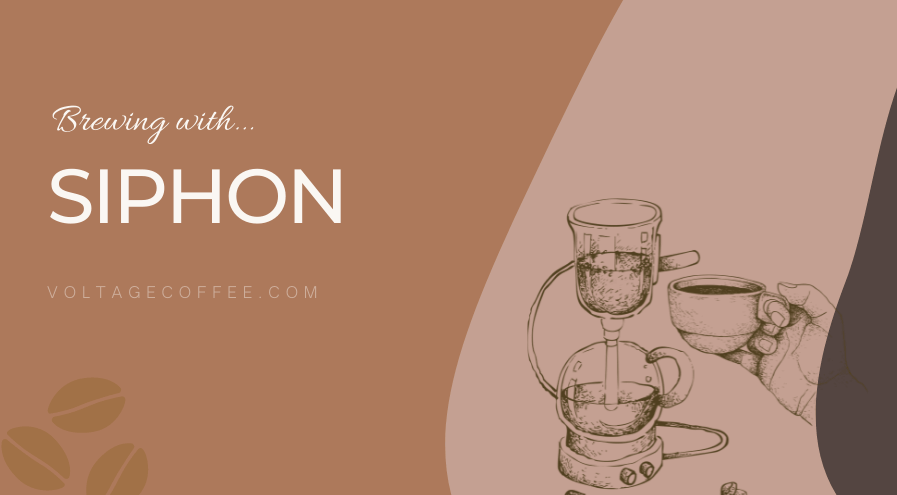 Of all the methods for making coffee, there is one that is historically one of the most fascinating and visually satisfying of them all. Yet the invention itself has another plot twist that is also worthy of telling to clarify how the siphon coffee machine came about. Let’s find out more…

What is siphon coffee? 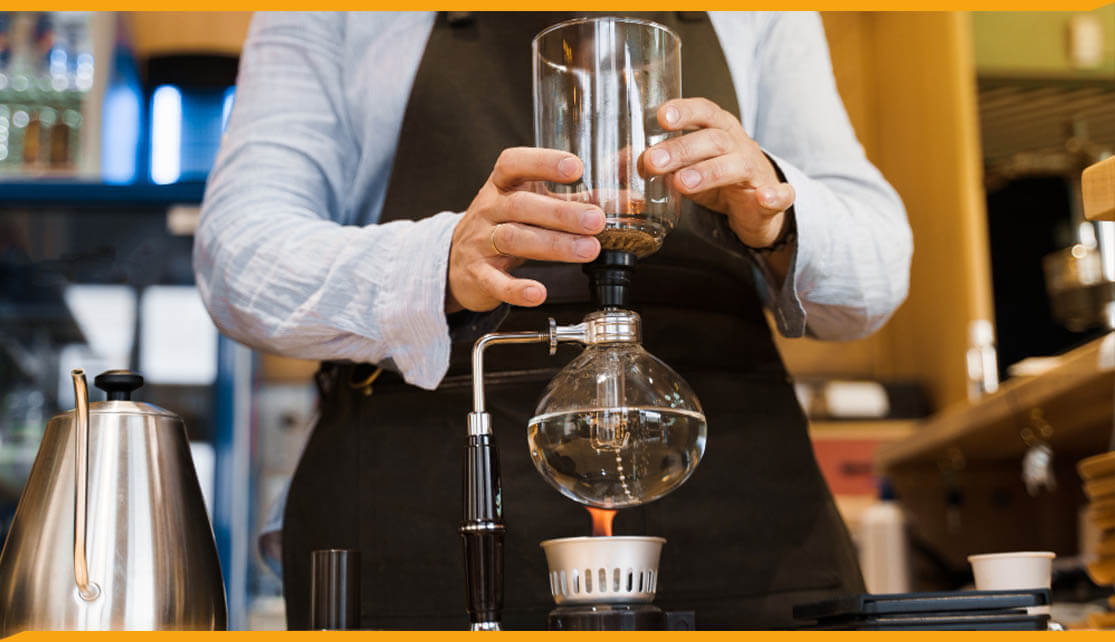 The siphon coffee-making method isn’t hard to explain since it’s based on the physics of liquids reacting to expansion and contraction. The beauty of siphon is that it doesn’t rely on high heat to make the expansion of water happen. Two components make a siphon work and include two vessels that transfer them at different times. The lower vessel holds the water which is forced into the upper vessel.

Both of these vessels are connected by a small tube that allows the water to enter the upper vessel. A heat source underneath the lower vessel causes the water to heat up to the point of boiling. The expansion is what forces the water into the upper section. This is where the coffee grounds are stored and will brew your coffee. The heat source is turned off at this point and the temperature in the lower vessel begins to cool.

As it cools, this turns into a vacuum pulling the coffee into the lower chamber through capillary action. The rest is both gravity and vacuum that allows your coffee to get sucked through a filter that covers the upper draining section. After this, the coffee is then ready to drink. 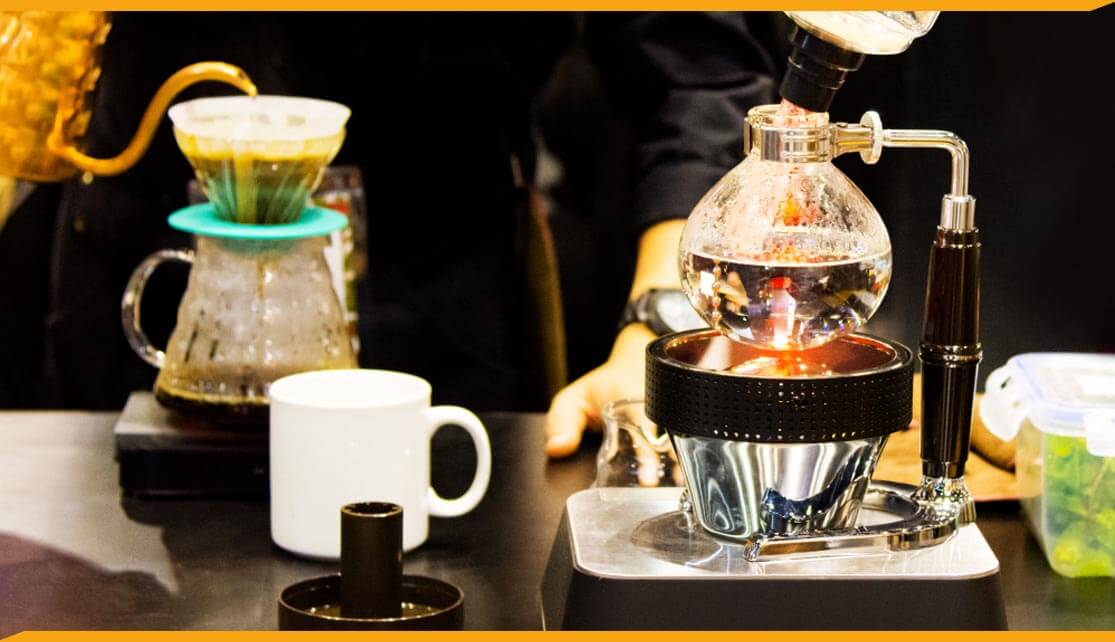 This is why certain pour-over methods will have different brewing steps, different water temperatures, and varying grind selections. It’s hard to ruin a cup of coffee by using the siphon method if you follow the directions correctly. Since the heating source below is causing the coffee to stay in the upper chamber, the brew time helps provide more complete bloom cycles without burning the coffee.

If you’re not being careful you can easily cause pour-over coffee to taste terrible if you’re in a rush. Siphon coffee is not as sharp-tasting and allows the subtle flavors to come through that you wouldn’t notice otherwise. In short, the flavor profile is the first thing you’ll notice when sipping a fresh cup of siphon brewed coffee.

History: Made In Germany And Gleaned By Others…

The original design of the siphon coffee maker was in fact designed by a German inventor only known as S. Loeff and was patented in 1830. Unfortunately, the design proved to be unpopular and had been forgotten for the next decade. It was among the first that used a vacuum to brew coffee

James R. Napier created the Naperian coffee machine in 1840, but sadly it was not patented as well. Rather, it was forgotten with many of Napier’s inventions including many steam-powered innovations that couldn’t be envisioned properly. His inventions even included a hot-air engine (1853-1857) and partnered with Professor William John Macquorn Rankine which could have replaced steam-powered engines with greater output power.

Napier was also one of the first to help develop the Iron-clad Gunship known as the Erebus in the 1850s. Aside from this, the often stolen credit often goes to Marie Fanny Amelne Massot. The reality of the matter may sound murky, yet history proves that one good idea is another person’s prosperity. It seems that Marie Massot had seen the 1830s German patent from Loeff listed in a French reprint of the patent in 1838.

It was ironically an exact duplicate of Louis Francois Boulanger’s copy of Loeff’s siphon coffee machine patent which Louis patented in France in 1835! Well, as the story goes, the siphon coffee machine underwent another design upgrade and modification with Massot’s version further adorned with a decorative metal crown and balloon-shaped glass vessels. It was patented under Marie’s rather impressive-sounding stage name Madame Vassieux.

This patent that was filed in 1841 in Lyons, France was the invention that got the ball rolling for all siphon coffee makers of this age. Since Marie Massot was a known socialite and courtesan with several French Nobles of that era. Her invention was meant to impress her guests by taking an otherwise little-known invention and exploiting it to gain Noble favors. Little did she know that her invention was stolen right under her feet by another in 1842!

It seems that Jean Baptiste Augusta Fortant, a tinsmith by trade had further invented a method for auto-extinction of the oil lamp under the siphon vessel, and had yet improved on Massot’s stolen design. In fact, it was nearly identical to the Massot version except it has no crown or pouring tap. It seems that this design was further lifted by another Frenchman by the name of Jean Baptiste Augusta Soleil the very same year.

But this is where the story comes right back around to German design… Since Soleil happened to mention that he wanted to popularize a version of the siphon coffee maker that was invented by a German physicist by the name of Johann Gottlieb Christian Nörrenberg, who just so happened to come to France to study in 1929. Not to get the story too diluted, there is a very strange twist that revolves around this.

Before coming to France, he was a teacher of physics and chemistry at the Darmstadt military school in Germany. The very same school where Nörrenberg taught his lessons on his ideas of a vacuum coffee machine! He actually published his findings in 1927 entitled: “Description of a coffee machine”, which included his findings on how the vacuum siphon coffee machine works.

This likely would have influenced a young student only known as S. Loeff to invent his so-called version of the siphon in Germany back in 1830. Ultimately, the unique history of the siphon coffee maker seems to have been lifted from Johann Gottlieb Christian Nörrenberg all along. Besides this, the story itself has become synonymous with being called the ‘Cirque du Soleil’ in many siphon coffee circles for obvious and dubious reasons.

Is The Siphon Coffee Maker Getting a Second Wind? 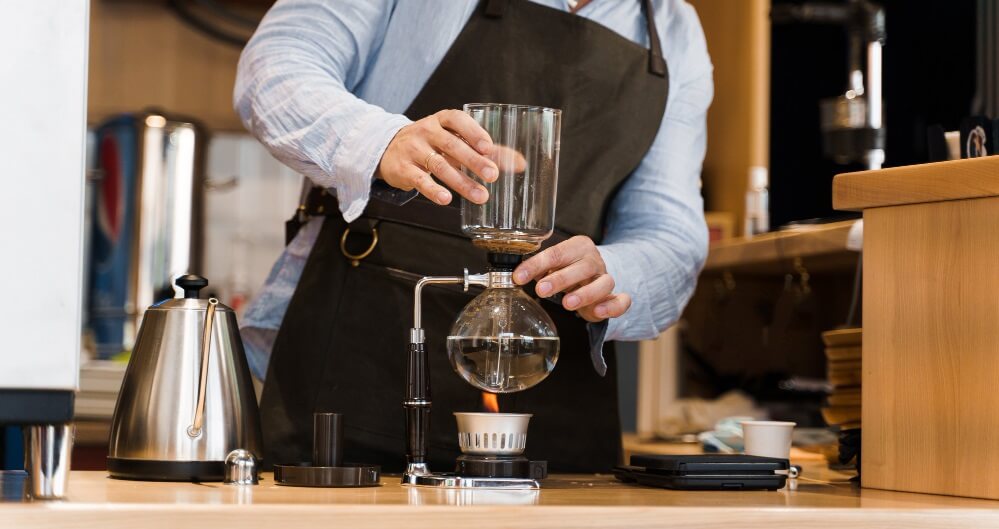 The fact is that the siphon brewing method never went away without mentioning the trope of “Bob’s Big Boy” somewhere in there.

Siphon brewing has become a very popular variant of coffee brewing methods since it’s still very entertaining to watch. But the flavor of how siphon coffee can taste is the real reason why it’s gaining momentum. It’s the combination of subtle flavors that reveal notes that might otherwise never be tasted in your coffee.

The newest designs bring back the visual attractiveness of the old-fashioned designs of the late 1840s, yet now include modern heating elements. The newest retro models offer infra-lamp heaters to boil the water, while others still include gas lamps. Yet this impressive design still sticks to the primary function it serves to make siphon coffee. You might be interested in how it works instead of getting a long-winded history of how it was reworked?

How Does Siphon Coffee Work? 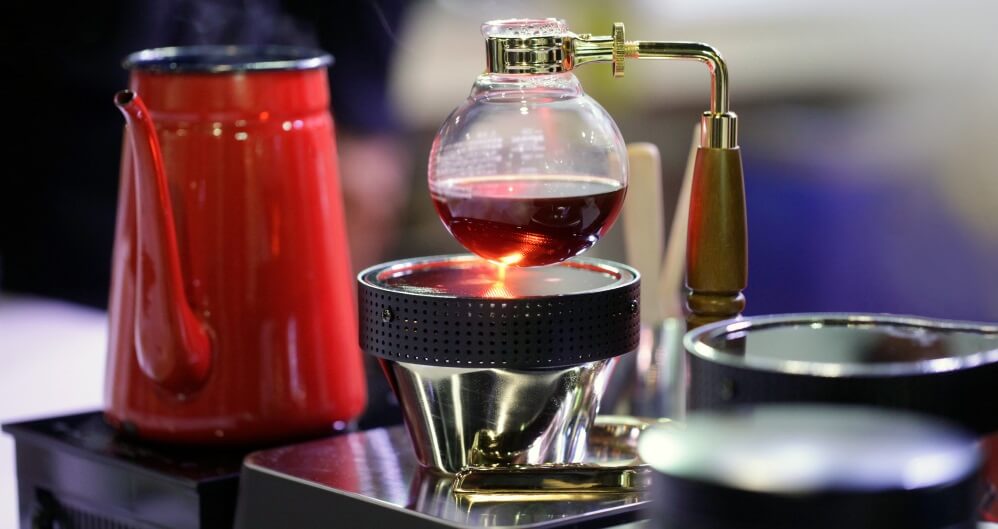 The science behind a siphon coffee maker is a lot like the Moka pot in many ways except for one big detail. The lower vessel which forces the water into the upper chamber begins to cool and causes a vacuum. This pulls the brewed coffee into the lower chamber and is filtered back down in the process. This is achieved with a process that is caused by equalization through expansion and contraction.

Check out how this works below:

All siphon coffee makers use a heat source that is located at the bottom of the lower glass vessel. Modern versions now employ infrared heating lamps, but enthusiastic fans will prefer using a lamp oil burner. An open flame needs constant attention and adjustment, so the water doesn’t get heated beyond 200°F. You’ll want to have some vital accessories to make brewing more precise.

Be sure to have a digital scale so you can measure your water and coffee grounds to the exact amount needed for each pot you brew. You also want to have a digital stopwatch so you will pay attention to brewing times. Another great addition is a digital thermometer that helps control temperatures if they get too hot or not within the optimal temperature you need. The most important item is a good coffee grinder to grind your beans fresh each time.

A standard siphon vacuum coffee maker that has two vessels stacked onto each other only allows 4 to 5 cups of coffee. This recipe uses 35 grams of coffee and 560 grams of water. So this will give you enough coffee to be enjoyed twice over for two people. Here is how you can get excellent results with your siphon coffee maker. 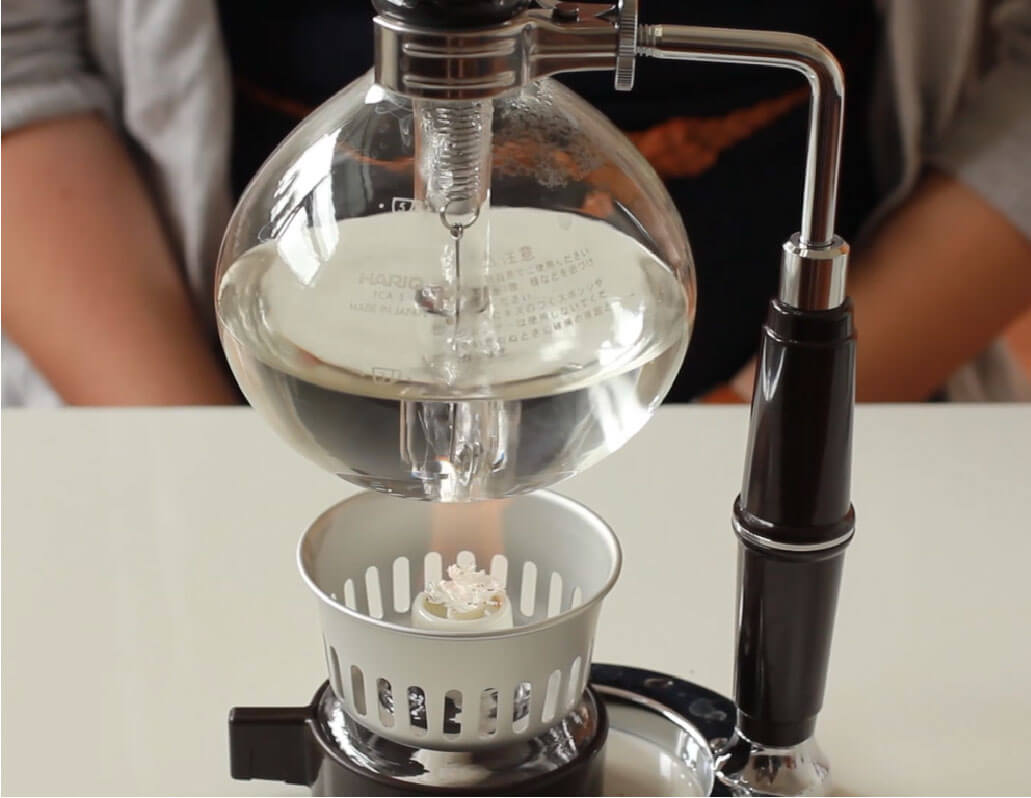 1. Insert your brewing vessel into the lower boiling pot

You first fill the lower chamber with clean filtered water and place the burner at the bottom of this chamber. As the water underneath is heating up, you will lay the upper section at… 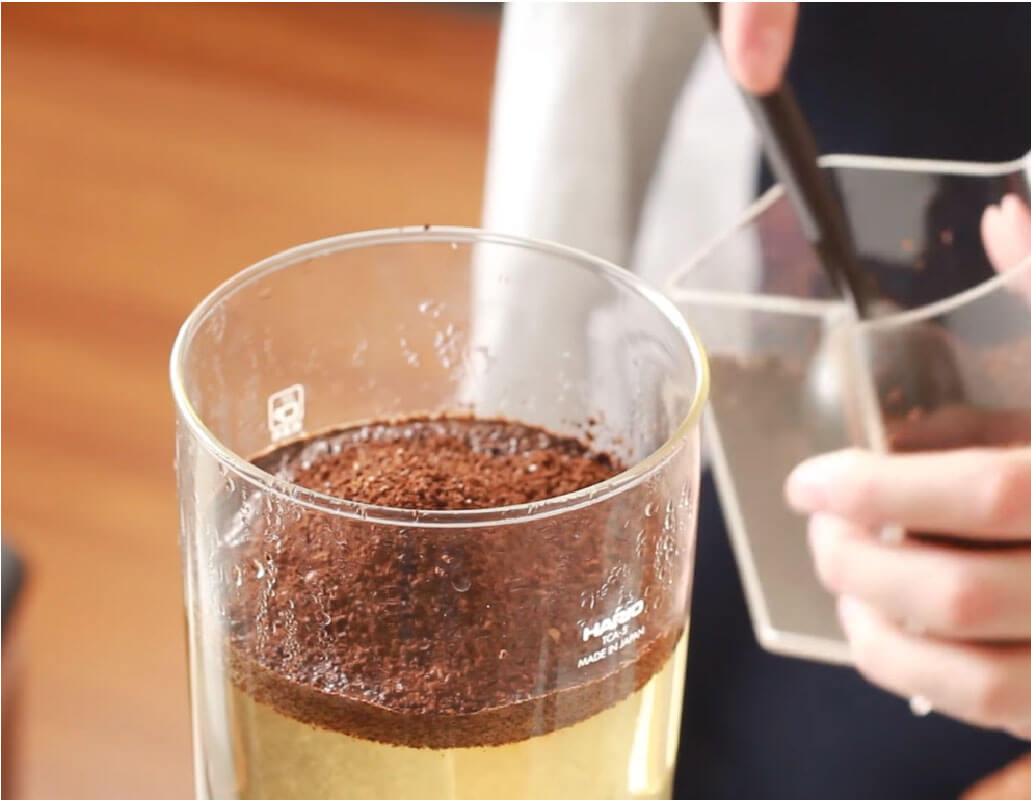 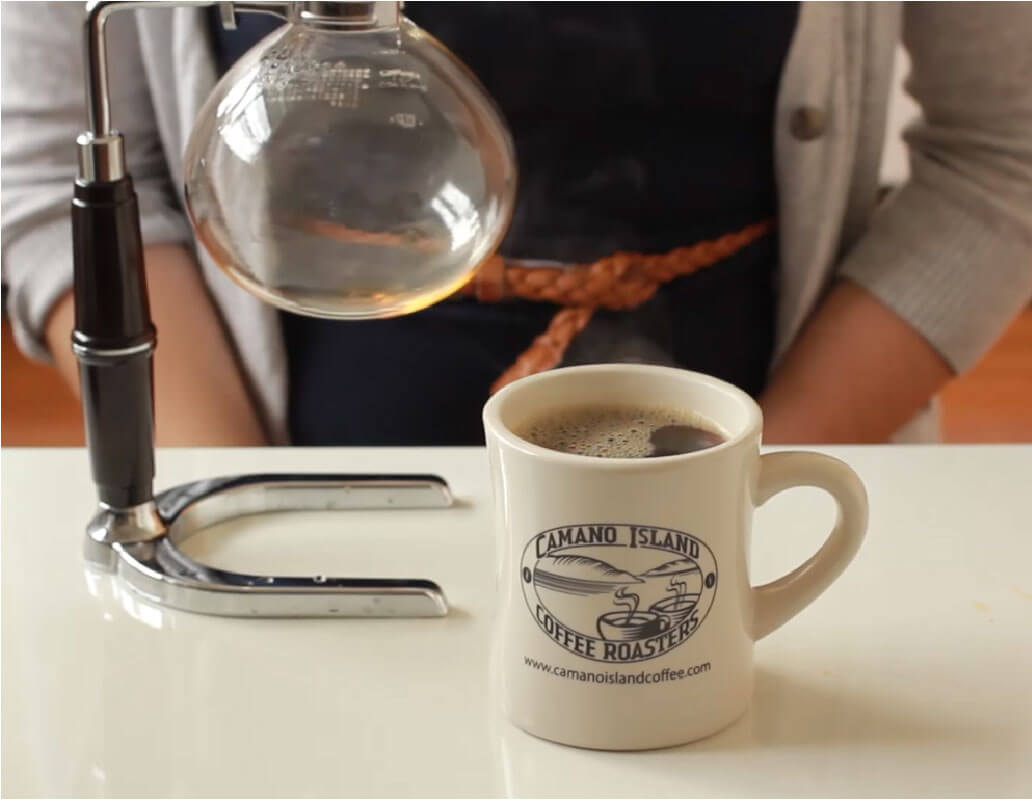 At this point, you can start pouring your brewed coffee into a cup and drinking it right away. It’s better to drink this coffee when it’s still nice and hot to preserve the flavor that’s..