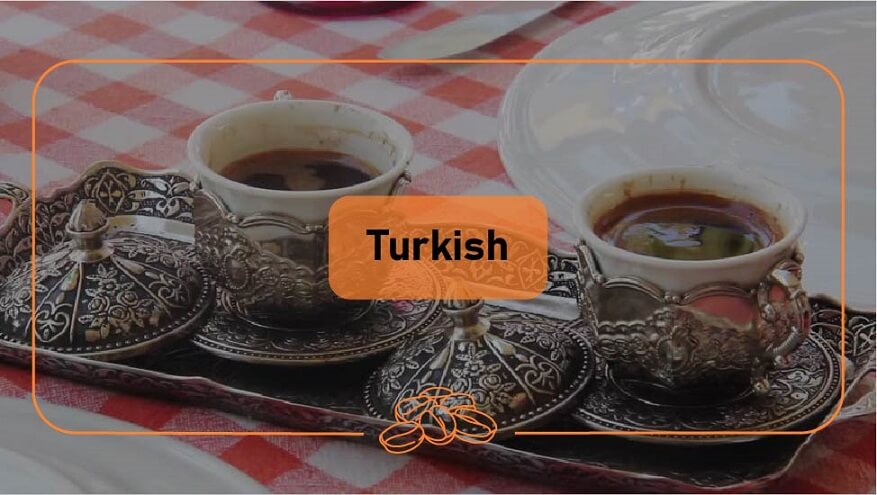 Classic Turkish coffee is still being made in the Balkans – for example, in Serbia, Greece, and the Middle East. Turkey imports as much as 220,000 tons of tea a year, and only 9,000 tons of coffee. Survey results show that most people think that tea, not coffee, is a reflection of Turkish culture.

Turkish coffee, or as some call it black coffee, is prepared by placing a few teaspoons of ground black coffee in boiling water and removing the foam as soon as the foam is lifted. It is poured into cups, and when the black precipitate is lowered, it is ready to drink.

If desired and depending on taste, it can be drunk with sugar or milk. This coffee is tastier if ground before brewing. Today, this is a rare occurrence, as all manufacturers sell ground coffee in vacuum packs. To make strong coffee with a bit of bitterness, you need to increase the coffee dose rather than the cooking time.

Turkish coffee is served hot and with some treats like biscuits. Some people make Turkish coffee by first placing biscuits in a cup and then pouring coffee over it.

Scientists say that Turkish coffee, which is rich in antioxidants and polyphenols and contains a moderate amount of caffeine, has a more positive effect on health than other types of coffee. Turkish coffee is not considered a food because it has no nutritional value, but it is a drink with a pleasant aroma and taste.

Turkish coffee has a refreshing effect on the body, due to the content of caffeine that promotes the physical and especially psychological properties of people. Coffee has a low-calorie value because it contains insignificant amounts of carbohydrates – 0.2%, protein – 0.7% and fats – 0.3%. It contains little calcium, iron, and riboflavin. A cup of black coffee containing no sugar, milk, or sour cream contains zero calories. Adding one or two coffee spoons of sugar increases the energy content of coffee by up to 20-30 calories.

Coffee is an indispensable morning drink for many people, and no matter how you consume it, it has many benefits for our bodies. Caffeine is a natural fat-burning supplement, but by adding milk and sugar to your favorite beverage, the effect is nullified. Also, research shows that black coffee can boost your metabolism by 3-11 percent. Laboratory research has shown how phytochemicals in coffee beans can help control cell growth, thereby reducing the development of cancer cells. A group of scientists argues that simply inhaling coffee smells can alter the activity of some genes in the brain, reducing the effects of sleep deprivation. When you drink a cup of coffee, the caffeine gets into your blood quickly, within 10 minutes.

Today, coffee is a gigantic global industry, employing over 20 million people. With a consumption of over 400 billion cups a year, coffee is the most popular beverage today. In Brazil alone, over five million people are employed by growing and harvesting over three billion coffee plants. According to Global Exchange, there are approximately 25 million farmers in over 50 countries participating in coffee production. October 1st is celebrated around the world as International Coffee Day, a favorite holiday of all lovers of this black drink.

Coffee is much more than a thrill. For centuries it has been synonymous with enjoyment and inspiration but still is today. The invitation to “go for coffee” is a phenomenon of rapprochement that is recognizable in almost all parts of the world, but also in our society, in all areas of life, from business, social, private, and family. Coffee is always an excuse to visit friends, an opportunity to relax, as well as a means of keeping us awake during the workday. Coffee is part of the subculture that surrounds us daily.

One of the most popular beverages – coffee, is made from ground beans of the plant of the same name from the Rubiaceae family. The tree of this plant grows up to three and a half meters long, which produces a berry-shaped fruit (red or pink). It thrives best at higher altitudes. Today’s distinctive, dark brown coffee appearance is obtained after heat treatment. It is not known for sure when this plant was discovered, but it is known to originate in Ethiopia, a country in East Africa. The original name of the coffee was derived from the Yemeni term for wine.

The current name, for coffee, comes from the Italian word “caffe” and even the first cafeteria was opened in Rome in 1645. It was often associated with the Turkish Empire and was treated as a Muslim custom. Yet its popularity is growing so much that it is even more popular than traditional Western European drinks in France (wine) and Britain (tea). Ethiopian legend says that the coffee was originally discovered by goats. Holding their flock, shepherd Caldi noticed the strange behavior of goats eating plants by the roadside and becoming unusually lively.

From the Ottoman Empire, Turkish coffee came from Yemen, to Saudi Arabia, then to Istanbul and later spread throughout Europe. Turkish coffee arrived in Europe through illegal channels, via Venice. This drink became popular when street vendors started selling it.